CDC tests show NYC patient does not have Ebola http://on.wsj.com/1ntMtZX

Doctor who died in Nigeria was an American flying back to U.S.

(CNN) - Patrick Sawyer had one stop to make before heading home to Minnesota to celebrate his daughters' birthdays: a conference in Lagos, Nigeria.
But when he landed in Lagos, Sawyer, 40, collapsed getting off the plane. He had been infected with Ebola in Liberia, where he worked as a top government official in the Liberian Ministry of Finance.
Sawyer was isolated at a local Nigerian hospital on July 20. He died five days later.

MONROVIA, Liberia) — One of Liberia's most high profile doctors has died of Ebola, and an American physician was being treated for the deadly virus. A second American, a missionary working in the Liberian capital, was also taken ill and was being treated in isolation there, said the pastor of a North Carolina church that sponsored her work.


Dr. Samuel Brisbane, a top Liberian health official, was treating Ebola patients at the country’s largest hospital, the John F. Kennedy Memorial Medical Center in Monrovia, when he fell ill. He died Saturday, said Tolbert Nyenswah, an assistant health minister. A Ugandan doctor died earlier this month.
He was receiving intensive medical care in a Monrovia hospital and was in stable condition, according to a spokeswoman for the aid group, Melissa Strickland.
“We are hopeful, but he is certainly not out of the woods yet,” she said.Early treatment improves a patient’s chances of survival, and Brantly recognized his own symptoms and began receiving care immediately, Strickland said.
The American missionary, Nancy Writebol, was gravely ill and in isolation in Monrovia, her husband, David, told a church elder via Skype, according to the Rev. John Munro, pastor of Calvary Church in Charlotte, N.C.

Munro said the couple, who had been in Liberia for about a year, insisted on staying there despite the Ebola threat. “These are real heroes — people who do things quietly behind the scenes, people with a very strong vocation and very strong faith,” Munro said.
There is no known cure for the highly contagious virus, which is one of the deadliest in the world. At least 1,201 people have been infected in Liberia, Sierra Leone and Guinea, according to the World Health Organization, and 672 have died. Besides the Liberian fatalities, 319 people have died in Guinea and 224 in Sierra Leone.


Ominously, Nigerian authorities said Friday that a Liberian man died of Ebola after flying from Monrovia to Lagos via Lome, Togo. The case underscored the difficulty of preventing Ebola victims from traveling given weak screening systems and the fact that the initial symptoms of the disease — including fever and sore throat — resemble many other illnesses.
Health workers are among those at greatest risk of contracting the disease, which spreads through contact with bodily fluids.
Photos of Brantly working in Liberia show him swathed head-to-toe in white protective coveralls, gloves and a head-and-face mask that he wore for hours a day while treating Ebola patients.
Earlier this year, the American was quoted in a posting about the dangers facing health workers trying to contain the disease. “In past Ebola outbreaks, many of the casualties have been health care workers who contracted the disease through their work caring for infected individuals,” he said.
There is no known cure for Ebola, which begins with symptoms including fever and sore throat and escalates to vomiting, diarrhea and internal and external bleeding.
The #WHO says the disease is not contagious until a person begins to show symptoms. Brantly’s wife and children had been living with him in Liberia but flew home to the U.S. about a week ago, before the doctor started showing any signs of illness, Strickland said.
“They have absolutely shown no symptoms,” she said.
A woman who identified herself as Brantly’s mother said the family was declining immediate comment when reached by phone in Indiana.
Besides Brantly and the two doctors in Liberia, Sierra Leone’s top Ebola doctor and a doctor in Liberia’s central Bong County have also fallen ill.
The situation “is getting more and more scary,” said Nyenswah, the country’s assistant health minister.
Meanwhile, the fact that a sick Liberian could board a flight to Nigeria raised new fears that other passengers could take the disease beyond Africa.
Nigeria’s international airports were screening passengers arriving from foreign countries, and health officials were also working with ports and land borders to raise awareness of the disease. Togo’s government also said it was on high alert.
Security analysts were skeptical about the usefulness of these measures.
“In Nigeria’s case, the security set-up is currently bad, so I doubt it will help or have the minimum effectiveness they are hoping for,” said Yan St. Pierre, CEO of the Berlin-based security consulting firm MOSECON.
An outbreak in Lagos, a megacity where many lived in cramped conditions, could be a major public health disaster.
The West Africa outbreak is believed to have begun as far back as January in southeast Guinea, though the first cases weren’t confirmed until March.
Since then, officials have tried to contain the disease by isolating victims and educating populations on how to avoid transmission, though porous borders and widespread distrust of health workers have made the outbreak difficult to bring under control.
News of Brisbane’s death first began circulating on Saturday, a national holiday marking Liberia’s independence in 1847.
President Ellen Johnson Sirleaf used her Independence Day address to discuss a new taskforce to combat Ebola. Information Minister Lewis Brown said the taskforce would go “from community to community, from village to village, from town to town” to try to increase awareness.
In Sierra Leone, which has recorded the highest number of new cases in recent days, the first case originating in Freetown, the capital, came when a hairdresser, Saudata Koroma, fell ill. She was forcibly removed from a government hospital by her family, sparking a frantic search that ended Friday. Kargbo, the chief medical officer, said Sunday that Koroma died while being transported to a treatment center in the east of the country.

Ebola Outbreak in Guinea has been labeled 'Unprecedented' by Doctors Without Borders (MSF).

It is spreading to Senegal and the recent suspected case in Canada has since been proven negative.

Conakry / Brussels / Geneva, 31 March 2014 – With eight confirmed cases of Ebola reported in the capital Conakry, Médecins Sans Frontières (MSF) is facing an unprecedented epidemic in terms of the distribution of cases now scattered in several locations in Guinea.

“We are facing an epidemic of a magnitude never before seen in terms of the distribution of cases in the country: Gueckedou, Macenta Kissidougou, Nzerekore, and now Conakry,” said Mariano Lugli, coordinator of MSF's project in Conakry. - MSF

via USA Emergency Broadcasting Network
Symptoms of Ebola HF typically include:
Some patients may experience:
Symptoms may appear anywhere from 2 to 21 days after exposure to Ebola virus though 8-10 days is most common.
Some who become sick with Ebola HF are able to recover, while others do not. The reasons behind this are not yet fully understood. However, it is known that patients who die usually have not developed a significant immune response to the virus at the time of death.
Treatment
Standard treatment for Ebola HF is still limited to supportive therapy. This consists of:
Timely treatment of Ebola HF is important but challenging since the disease is difficult to diagnose clinically in the early stages of infection. Because early symptoms such as headache and fever are nonspecific to Ebola viruses, cases of Ebola HF may be initially misdiagnosed.
However, if a person has the early symptoms of Ebola HF and there is reason to believe that Ebola HF should be considered, the patient should be isolated and public health professionals notified. Supportive therapy can continue with proper protective clothing until samples from the patient are tested to confirm infection.

Experimental treatments have been tested and proven effective in animal models but has not yet been used in humans.
USAEBN Emergency Operations Center will continue to monitor this outbreak and report any significant changes to you on our digital broadcasting station and website / social media outlets. - courtesy #USAEBN 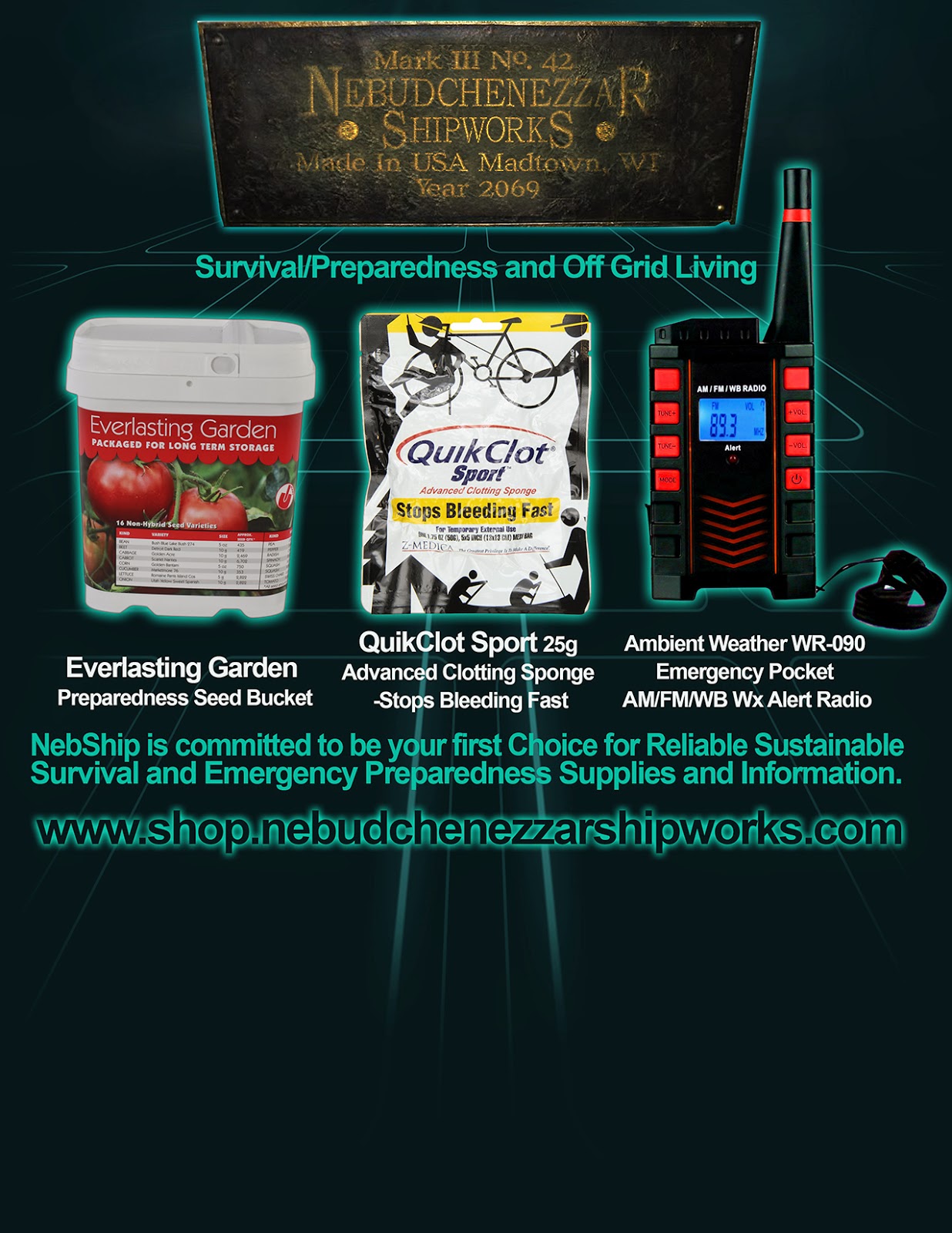 ebay.com/sch/nebudchenezzarshipwork
Madtown Preppers Alerts are for informational use only. These alerts purpose is to inform you of news events in order for you to adjust your family preparedness programs. We believe that knowledge is power and in order for you to make informed decisions, we try and bring you verified information, not to increase fear but to inform you. We do not endorse any of the sources we link to in any article.
www.usaebn.org